The death of Roe brings three things to mind that I would like to mention:

First: Thanks be to God! I was starting to wonder if I would see the end of Roe v. Wade in my lifetime.

Second: It may be helpful if we defenders of innocent human life continue to point out, every chance we get, that there is a strong precedent for earlier, wrong and embarrassing Supreme Court cases to be overturned by newer, more correct ones, as better information becomes available. For example, virtually no one disagrees with Brown v. Board of Education of Topeka Kansas as it overturned the now shameful Plessy v. Ferguson case which allowed for "separate but equal" 58 years prior. Dobbs overturning Roe is likewise a beautiful correction.

How embarrassing will it be for Disney and all these other companies when they are found to be on the wrong side of history for funding their employees' travel to get abortions in states where it is less restrictive? https://www.reuters.com/world/us/companies-offering-abortion-travel-benefits-us-workers-2022-06-24/

Do they provide it for the sake of profits? Is it because maternity leave causes a disruption in efficient production? I would rather see them profit by promoting human life and more future customers.

My prayer is for the conversion of hearts. Come Lord Jesus!

Sunday Homily: Baptism of the Lord - Union with God

This homily is four months in the making. It contains some thoughts and reflection from my sabbatical. Since it is now in print form in this blog, I am not constrained by time, so have developed certain parts a little further.

Because I kept a journal, I can tell you exactly how it went down. On September 17th, I received an email blast from Dr. Scott Hahn, a Catholic Bible scholar who used to be a Protestant minister. He wrote about two things in the email blast: 1) Holiness; and 2) the question: Do you have a personal relationship with Jesus?

Pope St. John Paul II encouraged us to add the Luminous Mysteries of the Rosary to our prayer lives. The first Mystery is all about today’s feast: the Baptism of the Lord Jesus in the Jordan. As Christians, we imitate Jesus and follow his command to be baptized. This is when our union with him begins. We are made new as sons and daughters of God. We receive the life of God, active in us, which we call grace. St. John Paul II gave us these mysteries because it’s exactly what we need. We have forgotten the power of baptism. Some people even wait to have their children baptized as if something better is going to come along. All that does is decide that the child will not have faith. Nothing better is coming. Union with God is the best thing. It’s why we were made. And it begins with baptism.

In talking about union with Jesus, I sometimes use the word “relationship,” but I use it with caution. We have hundreds of human relationships. But in every one of them, I’m over here and you’re over there. No human relationship will ever be like the union that Jesus wants with us: union on a soul-deep level where we partake in His divine nature. Therefore, this is an important part of the answer to another question many of us likely hear from our friends: “Why do I feel so much better when I leave the big box church than when I leave Mass?”

Feel? Is it about how we feel? Or is it about Jesus whom we know with our intellect? St. Teresa of Calcutta had a 40-year dry spell. She didn’t feel good about Jesus for decades. But she knew she received him in the Eucharist every day. Read St. Paul, who wrote about 2/3 of the New Testament. Did he ever write about the importance of feeling good? On the contrary: He wrote about the multiple times he was whipped with 39 lashes, the times he was stoned, shipwrecked, starved, etc. St. Paul did not feel good, but he knew he had union with Jesus from the moment Ananias baptized him. He knew it was Jesus he was receiving as he offered Mass. Then when he did get the chance to stop and pray, did he feel good in prayer? He said he had concern for all the churches on his heart. Could he focus or was he distracted? He probably was not feeling good consolations in prayer.

Let’s not forget about the related topic of holiness, which I mentioned at the beginning. At the same time I was reflecting on these things, I was also reading St. Josemaría Escrivá. He wrote: “There is no such thing as second-class holiness. Either we put up a constant fight to stay in the grace of God and imitate Christ, our Model, or we desert in that divine battle.”

Plus, my meditation that day from In Conversation with God by Fr. Francis Fernandez ended with this: “All roads that lead to God have to pass through prayer and sacrifice.” Moreover, in the Gospel that day, Jesus used a parable to talk about those who follow quickly with joy and then fall away. Fr. Fernandez added: “At the moment of truth they succumb because their allegiance to Christ has been rooted solely in feeling and not in prayer.”

Prayer is difficult! Are we seeking ourselves, or are we seeking God? St. Augustine pointed out: “Few look for Jesus for the sake of Jesus.” Will we follow Jesus in prayer, sacrifice, in His footsteps, even if the path is difficult? The Lord Jesus calls the pleasures of the world “thorns.” St. Basil the Great points out: Pleasures don’t seem like thorns at the time, but we end up with bloody hands. The bottom line is: prayer and mortification bring fruit; focus on feeling good is sterile.

It is worth pointing out here in print something I did not take time to expand in the homily in my desire to keep it short and streamlined. Feelings are gifts from God and can be quite useful. They are neither good nor bad in themselves but need to be used appropriately. We just need to be careful not to be misled by our feelings, or to make decisions based on feelings alone without the use of intellect. “Mot” is the root of both the words “emotion” and “motivation,” so we can see they are related. It is possible to have an emotional experience from a certain type of music, for example, or to be fired up by a motivational speaker, and think we are having a spiritual experience. It certainly may be a spiritual experience, but maybe not. And we certainly should not forget what we know with our intellect.

When it comes to worshiping God and entering into union with Jesus, we don’t need a motivational speaker that makes us feel good. And even though we do our best to praise God in song, our music will never be to the same level as the entertainment industry. What we do need is a generous yes to share in the divine nature of the Lord Jesus. We need a real union with Him, which we know He brings about in the Sacraments of His Church.

So, what do we do now? Love demands that we invite others to the best thing, which is union with Jesus. I tried it just the other day. I assured a friend, who is a fallen-away Catholic, that I am praying for his mother, who is declining in health. But I also revealed that I am praying for his return to Sunday Mass. Much to my delight, he said it has already been on his mind and he is making plans for his return. Thank you, Jesus!

End of the Pilgrimage

Santiago de Compostela is the end of the pilgrimage for pilgrims who make the Camino de Santiago. So, it seems appropriate that Santiago de Compostela was my final side trip of my sabbatical before heading back home. I was fortunate enough to concelebrate Mass at the main altar here in the cathedral of Santiago (St. James) and pray at his tomb: 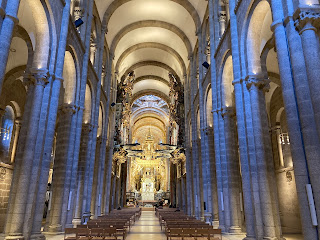 As pilgrims enter the cathedral at the end of the camino, they encounter the world's most famous giant thurible, the "Botafumeiro," which takes eight men to operate. Since I was not there on a feast or solemnity, I did not get to see it in action, but there is plenty of video footage online. 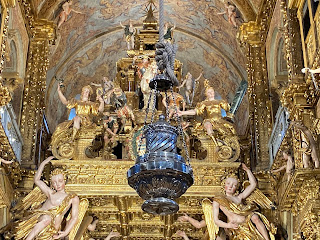 Find out more at: http://catedraldesantiago.es/en/

The Basilica of Sagrada Familia (Holy Family) is in the news once again as its newest feature alters Barcelona's skyline.

I was blessed with the fortune of being able to visit this magnificent basilica which has been under construction for over a hundred years: 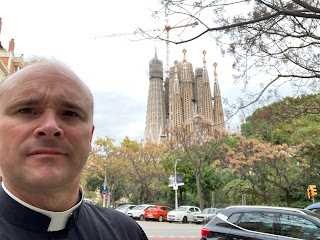 As magnificent as Sagrada Familia is, I have to admit the Cathedral of the Holy Cross and Saint Eulalia was my favorite between the two. Here is a selfie I took of the outside:

And here is a shot of the inside: 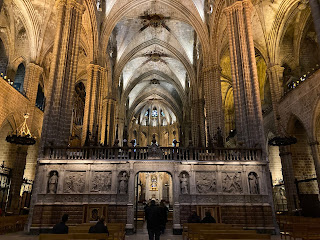 Just when I though the tour was over, I went out this door which open to a courtyard surrounded by about a dozen side altars. Yes, those are ducks in the lower left hand corner: 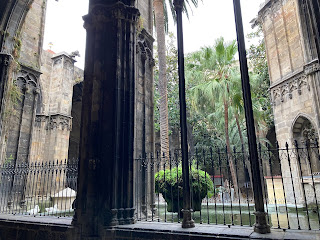 Valencia is the other city I visited on the Mediterranean. There was construction both inside and outside the cathedral, so the pictures you find on the internet will be better than the ones I took. Here is a shot of the Blessed Sacrament chapel where I was blessed to offer holy Mass: 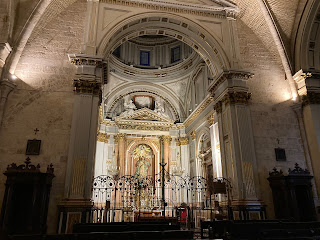 Finally, I took a stroll on the beach in Valencia and came across the coolest Burger King I have ever seen: 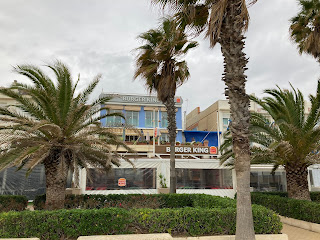 I’m on a whirlwind tour of the cathedrals of Southern Spain. I find the area very intriguing because many of these cities were Muslim strongholds when the Moors ruled Spain for several centuries in the Middle Ages.

I took this picture from the famous Roman Bridge in Córdoba. This cathedral, which forms the skyline, used to be a mosque: 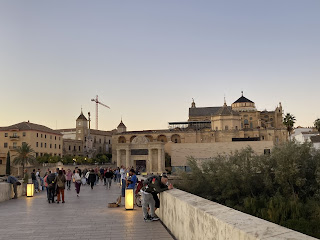 The cathedrals are massive and filled with the best artwork giving glory to God and telling the story of His love for us.

Here are the apses of those in Toledo. Sevilla and Granada: 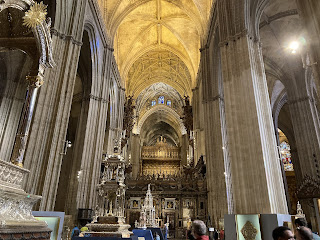 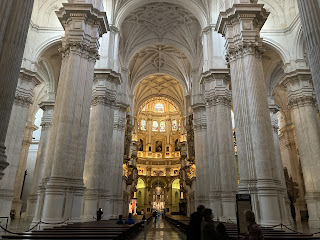 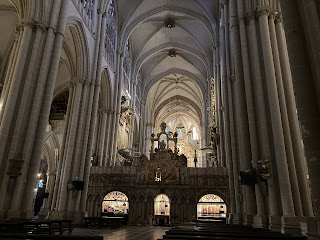 When the Son of Man comes, will he find faith on earth? Luke 18:8

In this previous post I showed some of the celebration of the National Feast of Our Lady of the Pillar. The feast commemorates the encounter of St. James and the Blessed Virgin Mary at this site in Zaragoza: 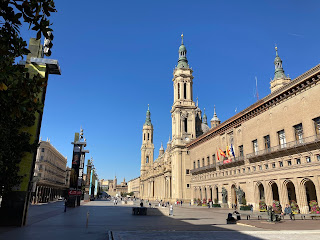 The plaza is surrounded by a very large Basilica of Our Lady of the Pillar (above), the church of St. John the Baptist, and the Cathedral of the Savior (below): 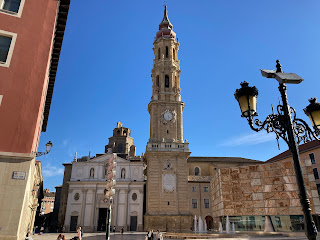 Some of the history promises great hope for the future. The Romans who built this amphitheater eventually converted to Christianity and were a powerful force in spreading the Gospel. 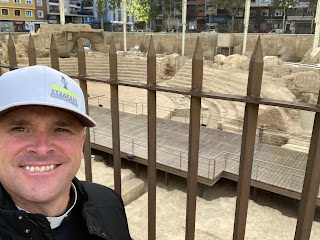 Much later, for several centuries, Spain was ruled by the Muslims who built this castle, but once again, the Truth of Christianity prevailed. 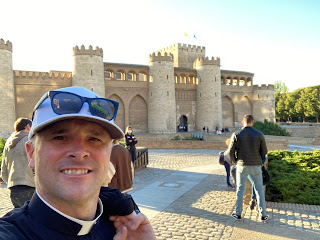 This gate marks the incursion of Napoleon, who wanted to conquer the world and destroy the Church. 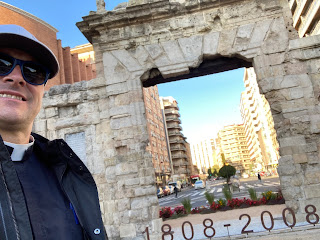 Now the new enemy of the Gospel is secularism in all of its many forms. Time will tell if there will be faith, not only in Spain but in our own land as well.
Posted by Fr. Bedel at 8:16 AM No comments: 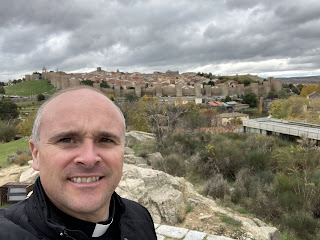 Rolling into Avila…
Posted by Fr. Bedel at 5:53 AM No comments: